My trip to Haiti was life changing.  When I first decided to go on this trip, I didn’t really know what to expect.  All I knew was that Dr. Bill and his DCF crew had been there many times before, there was a great need for service there, and this trip was the only trip where we actually worked in a real life dental clinic.  What I found when we finally made it to La Gonave was so much more. 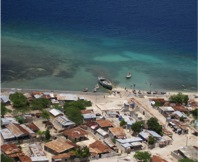 La Gonave, Haiti is a small island off the coast of Port-Au-Prince.  It is one of the poorest places in the western hemisphere, if not the world, being that the land has been overused and overworked.  When we landed on the dirt tarmac in La Gonave and stepped off of our tiny twelve-person plane on Saturday, we all realized that this fact was indeed true. Our ride from the airport through the village on the way to the West Indies Self Help (WISH) compound really opened our eyes to the need for service there.

When we arrived at the WISH compound, we met the wonderful and God-serving family that hosted us, Rod and Michelle Geiszler and their three children, Ben, Joe, and Garin and immediately sat down to a great meal.  The meals that we ate that week were so delicious! We learned most of our information about life in Haiti around the dinner table.  The Geiszler’s have lived there for three years and are about to sign up to stay another four years on the island.  They were able to give us a lot of insight into what to expect during our 5 days spent in the newly reconstructed dental clinic.

Sunday morning we went to the local church where we were able to have a full Haitian church experience. The Haitian service incorporated a lot of singing, which I truly enjoyed.  By the end of the service, I was even signing along to some of the hymns.  The songs were in Kreyol, which is very close to French.  We all had our fair share of difficulties with the language barrier but the interpreters that we met were immensely helpful.  After church, we were able to spend some time exploring the village and even got a chance to go snorkeling.  I had never been snorkeling before, so this in and of itself was an exciting and new experience for me.  I have never seen such beautiful coral reefs.

The next day was our first day of clinic.  We woke up in the morning, ate breakfast, and had a small devotional.  We even had a guitar with us to sing and worship together.  We worked Monday thru Friday from about 9am to 5 pm, and it was definitely tough.  Most of the clinic was set up for extractions but we also did some restorative work and some hygiene.  The people living on La Gonave gave us some hard cases but God helped us serve them and heal them from their dental troubles.

Every night after clinic and the most refreshing and amazing shower, we ate dinner together as a family and then had some sharing.  It was so nice to be on a smaller team and really get to know the people that we were traveling with.  The Geiszler’s also taught us a few games that we will definitely have to bring back to the US.

At the end of the week, I realized that I had learned a lot about myself, about God, and about life and I wouldn’t change my decision at all about taking this adventure to Haiti with our group, my now Haitian family.  We are truly fortunate and because of this trip I have grown closer to the group I traveled with and to God.