Alumni Spotlight: Sasser reaps the rewards of dentistry and service

Charleston, S.C. is home to several nonprofit dental and medical clinics that provide healthcare to underserved communities around the city. And chances are good that, if you walk into any one of these clinics, you might run into periodontist Dr. Bill Sasser. 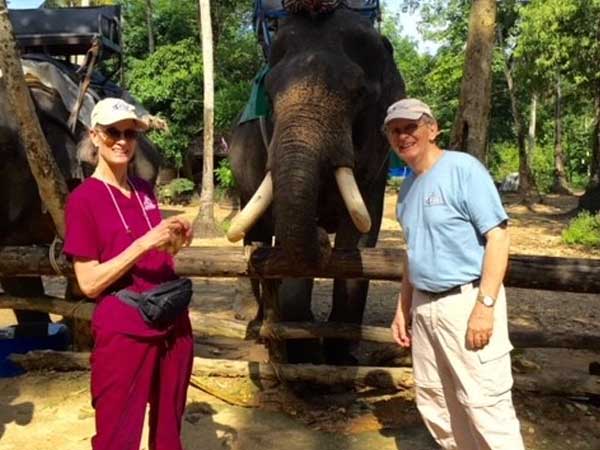 “Well the one that I’m completely in charge of is North Charleston Dental Outreach. I’ve been the dental director at that clinic for many years. But I also volunteer periodically at East Cooper Community Outreach, the Dreamcenter Clinic, and at Our Lady of Mercy Community Outreach too.”

In addition to volunteering, Dr. Sasser spends one day a week as an attendant with the Advanced Education in General Dentistry (AEGD) residents at the Medical University of South Carolina, (MUSC). In addition, he works one day a week in private practice at a low income dental office, while overseeing Dental Community Fellowship (DCF), a faith-based dental student group Dr. Sasser and his wife, Susalee, formed in 2002 at MUSC. But it was his love of international mission trips that ultimately led Dr. Sasser to leave full-time work in a private practice setting and devote himself almost entirely to volunteering and overseas service.

“East Cooper Community Outreach was the first charity dental clinic in the Charleston area. It was established in 1991 in response to a desire to bring help to the area recovering from damage caused by Hurricane Hugo. This provided my introduction to volunteer work,” said Bill. “A few years after that, I went on my first overseas dental mission trip to Monterrey, Mexico. It was basically just a long weekend of training, but one short-term mission trip led to two, which led to three, etc. Eventually I’d go overseas five or six times a year. But, at the time, those trips were primarily to Central and South America. Serving in those countries was fine, but I desired to venture further and stay for longer. This ultimately became a reality because I’ve now served in 35 different countries.”

Originally from Homewood, Bill was on track for a career in pharmacy. He graduated from Samford University in 1966, practicing in retail for a year, but with the Vietnam War still raging, he decided to join the Navy instead of risk the draft.

“When I was nearing the end of my three year commitment to the Navy, I began contemplating what I should do next. I could stay with the military, get out and go back to pharmacy, or pursue a career change. I applied to several dental schools, and was particularly interested in UAB’s program because it was close to home. However, I received an immediate acceptance to MUSC, so I decided to move to Charleston and attend MUSC.”

While at MUSC, Dr. Sasser’s mentor was Dr. Doug Parham, an attending faculty member in the Department of Periodontics.

“Doug took me under his wing, and I became especially interested in periodontics,” remembered Bill. “I enjoyed it clinically and was particularly drawn to the surgical aspect of the specialty. I really wanted to go to UAB for my residency, was accepted into the program, and was excited to return home. I even gave consideration to staying in Birmingham for practice because there weren’t many periodontists in the area at the time, but I’d already been talking with Dr. Parham since my days in dental school about joining his practice. I continued communicating with him through my residency, and ultimately decided to return to Charleston to practice with him.”

But Bill’s earliest years in dentistry didn’t turn out to be as fulfilling as he thought they would.

“I had my priorities all wrong in the early days of practice, without a clear barometer for what success really meant,” admitted Dr. Sasser. “I had a busy practice but felt like a failure in some of the more important aspects of life. My dental practice took far too much time and priority, my family suffered and divorce was a consequence. Fortunately, God doesn’t give up on us and offers second chances!”

As Bill started volunteering more and giving back to his community, he began to redefine how he measured success. Dr. Parham retired in 1987 and Bill practiced solo for a number of years. Then, in 1996, he brought in a partner which freed him for additional mission travel beyond the Americas and allowed for longer times out of the office.

“At some point, we all have to realize that life isn’t necessarily about us. We have a certain amount of time and ability, but only a limited number of hours. We have to ask ourselves what we’re going to do with all of it. What difference are we going to make in the lives of others? If all you’re working for is materialism, you’re likely going to be bored by the process. I learned that I get much more satisfaction mentoring students and serving the needy without compensation than I do getting paid!”

In the mid-2000’s, Dr. Sasser sold his practice but stayed on as an associate. Finally, in 2015, he walked away from that office altogether to devote himself full-time to volunteering, mission work, and serving as a positive influence in the lives of MUSC’s dental students through DCF.

“If you want to know what you’re called to, then find something that needs to be done and do something about it. Personally, I struggled a lot during dental school because of financial pressures, marital strain, lack of a spiritual focus, as well as the challenge of academics. I’ve often wondered that if there had been a group committed to service, faith, and community for dental students while I was in school, I might’ve had a different experience. DCF is the result of Bill’s consideration of his life and the influence of friends in the Christian Medical and Dental Associations. He and Susalee provide service and support to the students, host monthly speaker luncheons, weekly Bible studies, and periodically school wide social events. A favorite is the cookout and bonfire held at the end of gross anatomy. It’s a rite of passage into dental school when the freshmen get to burn their scrubs worn in the dissection laboratory!”

Dr. Sasser continued, “But I still focus a lot of my time on arranging mission trips for students through DCF, with two main goals in mind. First, we obviously want to help people with dental needs in places where they don’t have access to dentists or the money to afford care. Some of the places we’ve served in Africa have one formally trained dentist for a million people, so there’s certainly a great need. However, I also realize that anything done on a short-term basis will have short-term results unless the students attending these trips really see and understand a deeper calling in their personal lives. It’s hoped that many will catch the mantle for volunteer service, thus yielding a much longer-term benefit for team participants.”

Bill and Susalee have two children, and five grandchildren. Their daughter, Carrie, and her husband live in Brooklyn. Their son Will (M.D. at UAB Children’s Hospital) and his wife live in Birmingham, so Bill still returns fairly often to his hometown to be with family. The couple also make it a point to spend time together at their home on Edisto Island, S.C.

“Shortly after we were married 30 years ago, we built a house on property that has been in Susalee’s family for generations. We have 80 acres on a salt water creek. I love to be outside, getting hot and dirty! Cutting grass or fishing is great therapy.”

Sounds like a blissful place to retire to altogether, right?

“Oh, I think I’d quite frankly be bored! I want to use my time and talent to help others as long as I can. I’m grateful God is sustaining me, and love making a contribution to people’s lives. Getting involved in volunteerism has been the most rewarding portion of my dental practice.”